Alongside our monthly Price Know-how publication, at the beginning of every year we provide an assessment of what has happened over the past year and what may happen in the year ahead, particularly in terms of the outlook for polymer prices. We publish this insight here on our website, as well as via BP&R and in-part through PRW, thereby taking advantage of widespread industry circulation opportunities.

As with any forecast and evaluation authoring, accuracy is important to ensure that the content provided has perceived ‘value’.  As an good example of this, we have included below our outlook for 2015, which was written in 2014; it is interesting to note how accurate this outlook was in respect to what actually happened during the year.

And although as we clearly state in publishing this content that ‘the information provided is based upon data available from both external an internal sources, and whilst care is exercised in producing this report we give no guarantee of accuracy’, we are confident that both our annual ‘outlook and review’ and monthly Price Know-how, can assist our readership to evaluate the market from every angle and make confident and informed business decisions.

For the first time since January 2009, prices have fallen at the start of the New Year.  As can be seen in the table below, the influence of feedstock was irresistible.  That said, producers managed to improve their margins by not passing through the full extent of the feedstock reductions.

So after an unusual start to a new year what next?

As low crude oil prices continue to put polymer prices under pressure, will future prices be determined by feedstock or supply/demand fundamentals?

The graph below, which combines polymer, feedstock and crude oil pricing, provides a pretty clear indication that rapid price deflation is occurring in both the petroleum and petrochemical areas of the global economy. 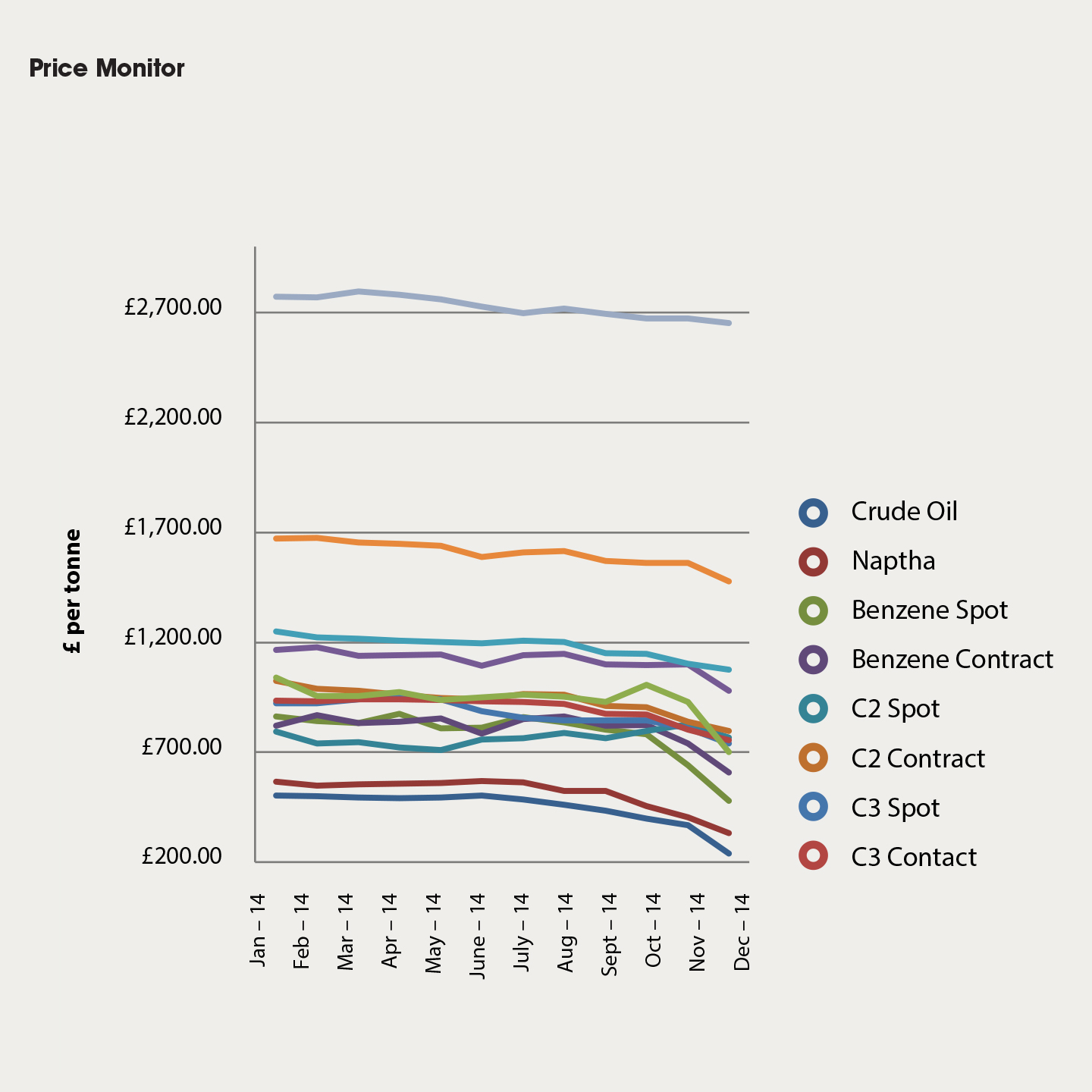 Whilst, as shown in the following graph, the recovery in feedstock prices following the 2008 crash were supported and in part driven by recovering oil prices, the possibility of a sharp bounce in oil prices in 2015 appears to be very limited, with many pundits suggesting that oil prices are likely to remain low through at least for the next 12 months.

However, two contrasting factors may both have a part to play in what happens to polymer prices going forward:

A more likely influence on polymer pricing in the short-term is supply and demand.  Following the losses polymer producers incurred as a result of holding high inventories as the market price of polymers crashed immediately following the Lehman’s Crisis in 2008, the producers have become far more conservative and have closely matched polymer production with demand.  In the current market this is what has enabled polymer producers to limit the extent of the upstream price reductions they have passed through into polymer selling prices, and effectively they have managed to enhance margins and profitability.

So it appears that there are two competing factors in terms of feedstock costs and the supply/demand balance likely to influence polymer pricing going forward.  This could lead to a range of possible outcomes.  However, if crude oil prices continue to remain depressed, then the likelihood is towards lower polymer prices, albeit with polymer producers enjoying better levels of profitability.

Exchange rates will continue to be an import influence on UK trade.  With the expectations of further recovery, it is expected that the GBP will remain sandwiched between a weak Euro and strong USD.  Overall, this is likely to have a dampening effect on the UK economy with higher prices for our key European partners wanting to procure goods from the UK and more expensive imports from Asia.

The increase in import duty on polymers sourced from the Middle East and parts of South America into the EU has created some slight upward price pressure and certainly impacted availability of LLDPE and HDPE as producers seek the better returns from other parts of the globe.  The increase in duty is contrary to the longer-term objective of removing duty barriers to world trade, and pressure is mounting to further review this situation.

It is not anticipated that US shale gas will have a significant impact on global polymer pricing in 2015, as it is not until 2016 and beyond that US production capacities will necessitate a significant level of imports.  The possibility of creating a free trade agreement between the EU and the US is in marked contrast to the recent increase of import duties described above, and ultimately could have a far more significant impact on polymer production within Europe.

In summary, it appears that the market in 2015 is likely to look quite different to the last 12 months and it will be interesting to see how the situation evolves over the year ahead.